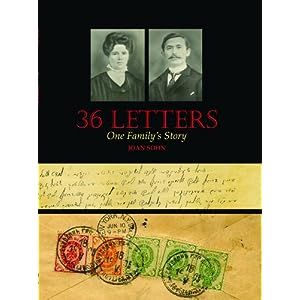 It was a chilly windy Sunday. My wife and I had just spent four hours on the top two floors of the new National Museum of Jewish American History on Independence Mall, reviewing artifacts like a deerskin frontier Torah, relearning timelines of Jewish settlement in Philadelphia, New Orleans, South Carolina and Florida. It was a lot of material to take in and to keep straight. It was in some ways a relief to drive down towards the Franklin Parkway, to attend the book launch I had committed to review for the Philadelphia Jewish Voice, for a very different and much more personal sort of history, at The Jewish Publication Society.

Just finding a place to sit down was something of a relief. Rabbi Barry Schwartz of The Jewish Publication Society, which published Joan Sohn’s 36 Letters, One Family’s Story, gave a brief introduction to JPS’s decision to publish this family history. Rabbi Andrea Merow, currently of Beth Sholom Synagogue in Elkins Park, spoke of Temple Sholom’s involvement with the Korman family where she had earlier held the pulpit, and the dedication of its chapel to Sohn’s great-grandfather Rabbi Binyamin Korman. She spoke of her friendship with Sohn and her encouragement for elaborating the family story.

Then Joan Sohn herself was introduced, to present a brief outline of her delightful, focused yet whimsical history of her grandparents’ romance — of their immigration estrangement while Chaim came to New York, and of Yente’s arrival to live first with her uncle’s Philadelphia family, and of their joyous reunion and marriage when Chaim came from New York and established
himself in the community.

But a publication launch, even with personal conversations with the relatives who knew the couple Yetta and Hyman as the matriarch and patriarch of their family, is not enough to communicate the warmth and love, the schmaltz, the krupnik and kugel recipes, the sheer passion of two Jews, each the children of classical Jewish scholars, who chanced to meet, who fell in love, who convinced their families to approve a long-distance match. Unlike my experience at the museum, where we hurried through two floors of American Jewish history in four hours, 36 Letters is a book to linger over, which I read eagerly for almost three weeks, despite its length, just under 120 pages.

At the most fundamental level, this is a story of discovery. As Sohn explains in her introduction, her parents (Sarah and Barney Moss) went to organize family items from Hyman Korman’s apartment, when he passed away in 1970. At the time, a box of portraits, documents and letters were packed away for her Uncle Sam, but remained at the Moss home unopened. Then, in 1996, Sam Korman too passed away. It was then that Sohn was invited to look through the materials for her own family keepsakes. Looking at the portraits, she was able to guess that the photographs were those of her grandparents.

Curious about the letters, she asked her parents, to see if they knew what they were about, but they were unfamiliar. Apparently, Hyman had never explained their significance. A family friend, Elyce Teitleman, located a translator, Mark Alsher, and Sohn’s parents underwrote the translation which began Sohn’s journey.

What she found was so much more than the photographs and letters. What she found was the autobiographical love story of the author’s grandparents, and it reads well – with aching absence, with a parting for the New World, with the delight of recognition and caring, with the anticipation of reunion, with the consummation, and the success of a life’s work together. On quite another level, this is a love story of the author, rediscovering her grandparents as young adults, and falling in love with them as valued friends. On still another level, it is a self-discovery by Joan Sohn, moved now from Melrose Park to Toronto, of how much she shared with her grandparents, and yet how different their experiences, in their very different migrations.

Sohn does not hesitate to give the reader background, from world history, from family history, from family recipes, in prefaces, in footnotes, in illustrations, in marginal notes. The experience of reading this book brought me back to my experience reading Martin Gardner’s The Annotated Alice – one of the favorite texts of my young adulthood — where an apparently simple children’s story was revealed for its complex secrets and internal references. Sohn has provided the same sort of illustrations, annotations, and background, lovingly compiled for the reader to understand the world of 1905, and the burgeoning universe that opened for Hyman and Yetta in the wonderland of the New World. I can only hope that you will linger as I did, and make friends with Joan Sohn’s grandparents, and share their love and their success.

All photographs, courtesy of Joan Sohn, with permission.

Click here for earliest work for the Philadelphia Jewish Voice.

Ben can be contacted at [email protected]