You are here: Home / Uncategorized / Open Letter to Secretary of Defense Robert Gates

On behalf of the Union for Reform Judaism, whose more than 900 congregations across North America encompass 1.5 million Reform Jews, and the Central Conference of American Rabbis, which includes more than 1800 Reform rabbis, we write to express our support for repeal of the military’s “Don’t Ask Don’t Tell” policy. We find disappointing the position espoused that ministering to gays and lesbians would violate religious freedom. We strongly believe that such a repeal need not compromise religious freedom within our armed services, but instead will lead to a stronger, more fair and effective military.

While respecting the complexity and seriousness of the issue, the White House and many current and retired military leaders have recognized the urgency of repealing “Don’t Ask Don’t Tell.” Joint Chiefs Chairman Admiral Mike Mullen and General Colin Powell, among others, have expressed their view that the policy should be abandoned.  These views reflect the fact that since its inception, “Don’t Ask, Don’t Tell” has forced gay and lesbian service members to live their lives in secret, always at risk of losing their ability to serve our country. Almost 14,000 soldiers and sailors have been expelled under the policy. It has been estimated by the GAO that the cost of replacing these service members exceeds $200 million, with a follow up study by an expert commission placing the figure even higher, at $363 million.  Particularly in a time of war and recession, these are human and financial resources we cannot afford to squander. 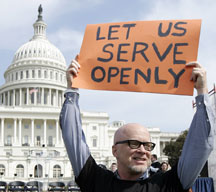 We know, however, that some in the religious community have expressed support for maintaining “Don’t Ask, Don’t Tell.”  We strongly hold the opposite view.  Communities of faith across the country believe in the importance of ensuring the rights of gay and lesbian Americans and repealing “Don’t Ask, Don’t Tell.” As Reform Jews, we are guided by the understanding that all human beings are created b’tselem Elohim, in the Divine image. Regardless of context, discrimination against any person is inconsistent with this fundamental belief, for the stamp of the Divine is present in each and every one of us. The repeal of “Don’t Ask, Don’t Tell” is a crucial step toward creating a more just and compassionate military. We must no longer allow prejudice to deprive our nation of the skills and commitment of talented and patriotic men and women.

More than two-dozen countries allow homosexuals to serve openly in their militaries without negative impact on unit cohesion or efficiency. In fact, as you know, among NATO countries, only the United States and Turkey continue to have such bans. In Iraq and Afghanistan, American troops serve side by side with openly gay allied service members. In addition, 75 percent of Americans, a majority of both Democrats and Republicans, believe gays and lesbians should have the right to serve openly.

The time has come to repeal this harmful law. We urge you to do so expeditiously and with the interests of justice held paramount.