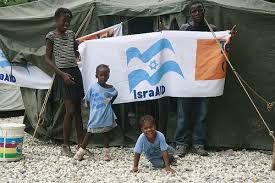 As Hurricane Tomas pummels Haiti, B’nai B’rith International is continuing its program of relief to residents of the beleaguered nation. Our partner, The Israel Forum for International Humanitarian Aid (IsraAID), an Israeli relief organization team already stationed in Port-au-Prince, Leogane, and Jacmel has quickly mobilized to lend assistance to refugees overwhelmed by flooding and mud slides.  IsraAID, of which B’nai B’rith is a founding partner, has been rendering assistance to thousands of refugees since January’s earthquake.

The hurricane has gained momentum in recent days at sea, bringing strong winds and heavy rains to the already devastated island nation.

B’nai B’rith World Center Director Alan Schneider, B’nai B’rith’s representative to IsraAID, is in Haiti as part of a previously scheduled visit to assist in long-term relief efforts. He said, “Disturbances broke out in a number of refugee camps housing thousands of displaced people from the January earthquake. The refugees were fearful that they would be left with no shelter and refuge at all.”

Where possible, children were transported from IsraAID-operated community centers and schools to safe areas. The Israeli team is working with other international aid agencies to coordinate relief efforts to transport handicapped refugees, who could not be moved safely, to centers and schools in the relatively safe Leogane area.