The extraordinary story of  Shirley Sherrod that has emerged so publicly over the last several days has reminded me of an extraordinary moment I lived through that involved her husband, Rev. Charles Sherrod. 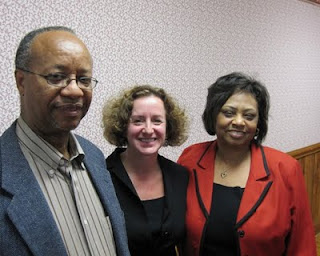 In 1963, Charles Sherrod, like several other SNCC activists (Student Nonviolent Coordinating Committee), came for several months to the Institute for Policy Studies, then a very new Washington center for progressive thought and action where I was a Fellow.  They  came to us for time to breathe, share, and reflect, after months or years of intense and harrowing work in the South.

We arranged a seminar for Members of Congress to meet Sherrod and learn from him what was happening in the South–specifically in the town of Albany [pronounced “All-Benny”] in southwest Georgia,  where he had been working.  About a dozen Members of Congress came.

Sherrod began by telling the story of Albany almost like an observer, a reporter. Then, as he began explaining the role of the Black church there,  his tone slowly shifted and he morphed into the Black minister that he was, giving a passionate sermon in the Black church in Albany.

The sermon was hair-raising. Transformative.

Unlike almost all of the other SNCC activists, Sherrod stayed in the very same community where he was organizing —  stayed in Southwest Georgia, committed to the very same people and the very same region. He has been there ever since.

I don’t know when he married Shirley, but she clearly,  like him, comes from the deepest kind of religious faith. The work she has for years been doing–to empower and strengthen the Black farmers of Southwest Georgia–and, it turns out, to empower white farmers too–is rooted in the best and deepest nonviolent traditions of SNCC.

It is disgusting — and predictable — that some right-wing racist TV jockey would attempt to smear and ruin her.

It is horrifying — much less predictable — that the leadership of the NAACP would let themselves, as they themselves named it, be “snookered” by a right- wing broadcaster from Fox News.  What on earth possessed their national leadership to react – especially knowing what they must know about Fox News — without even calling her or the local Georgia chapter where she gave the speech that was so brutally distorted?

I can’t but imagine Mr. Justice Thurgood Marshall, one of the NAACP’s great leaders, may he rest in peace, not resting in such heavenly peace this past week —  instead infuriated and ashamed as he heard the NAACP’s utterly unthinking, indecent response to the doctored videotape.

It is also horrifying — unfortunately somewhat more predictable — that the Obama administration would react as it did.

I do take heart from the fact that the Department of Agriculture, the White House, the NAACP, and even Fox News have apologized so abjectly.

Yet the whole series of events makes clear that the spirit of SNCC ought not be dead in the land, that the work that both Sherrods have done in their extraordinary lives is not yet finished.