You are here: Home / Archives for Sussam

Today we observe Veterans Day.  May we all remember and honor the service given to our country by these brave men and women in uniform.  They upheld the values of our country and, as young as they were when sent into service, they gave it all they had.  We owe it to them to remember their service.

On October 18th, I attended a ceremony dedicated to the 14 Jewish chaplains who’d fallen during service to the United States.  Their names are engraved on a plaque that was on exhibit that day at the National Museum of American Jewish History and a week later was installed on Chaplains Hill at Arlington National Cemetery.  The moving moment for me was the sight of the aged veterans, in full military regalia, snap to attention and salute the flag while we recited the Pledge of Allegiance.  Being a child of the 60’s, I grew up in an era when we distrusted authority (and anyone over 30).  Saying the Pledge was perfunctory and maybe also ironic.  Singing the national anthem invariably induced some jokester to call out, “Play ball.”  But it was no joke for these veterans of America’s wars.  They remember their fallen comrades and why they were posted to foreign lands, regardless of whether it was the right strategic move.  The values they upheld were of civic and religious freedom (and the “pursuit of happiness” which our religious forefathers did not mean the right to shop until we drop).

Recently, when I attended a private tour, “Journey on the Silk Road” at the Philadelphia Museum of Art, Cynthia John, who’d created this tour, referred to the Holy Roman Empire (quoting Voltaire, says my young friend) as “not holy, not Roman, and not even an empire.”  Later, I asked John to elaborate but she only had time to say that the Mongols, who’d transformed far-flung agrarian societies into an urban one based on commerce, were an example of a real empire.  Nobody loves his emperor, but people have managed to forge strong allegiances to other entities, whether a religious icon, a culture, or a sports team.

My Rabbi has said that one can deduce much about other people’s values by their passions.  So, what do we know about people who wear apparel– even religious garb– emblazoned with an athletic team’s name? That they value sportsmanship or the thrill of victory (or maybe the agony of supporting the underdog team)?  Just how different are the various teams from each other?  A similar example of artificial distinction occurred during the recent political discussions about gerrymandering in my state, when I heard one woman express her wishes thus: we should just use rectangles in drawing our electoral districts, because then we would be sure that they are fair (or at least, not subject to political jockeying for power).  When I was first introduced to maps as a child, the states with the straight lines were the easiest to remember and to draw.  But, they do not connote any real distinction between the bordering states.  More socially relevant were the rivers and mountains which may have contributed to variations in dialect, climate, and terrain.

At the museum ceremony, Rabbi Lance Sussman of Keneseth Israel Congregation spoke about the historical role of Jews in the American military, from Asher Levy petitioning to serve in the militia in New Amsterdam in 1657 (appeal initially denied, later granted) to the Jews who served in the American Revolution to a Jew being in the first graduating class at West Point (one of two graduates!).  In World War II, there were 500,000 Jews in the American Army, compared to a half million Jews who were conscripted in the Soviet Army.  One overlooked fact by revisionists who question the minor public role of American Jewry in the rescue of Jews from Nazi-controlled lands is that American Jews served at double the percentage of its share of the national population.  Their view was that the best way to help was to ensure victory for the Allieds, to defeat the Nazis.  These Jews served with bravery and distinction.  Of the 14 rabbis honored, Rabbi Alexander D. Goode was one of four chaplains (including Reverend George L. Fox, Reverend Clark V. Poling, and Father John P. Washington) who gave up their lifejackets when their ship, the USS Dorchester foundered and later sank in 1943.  They were honored as “the Four Immortal Chaplains” and were depicted on a U.S. postal stamp in 1943. 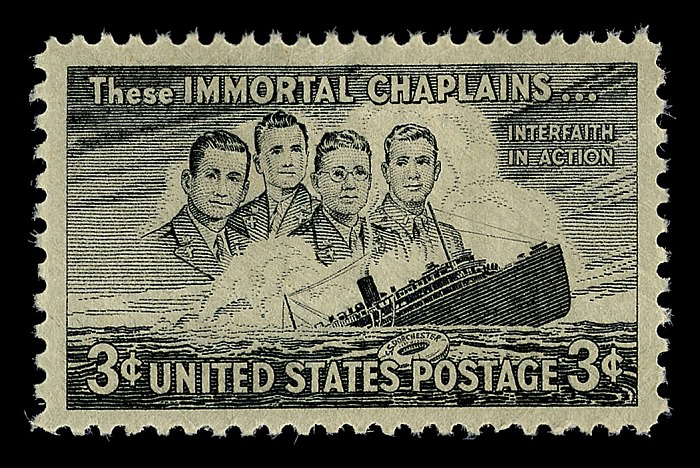 We do not have mandatory military service, so most Americans feel distant from our soldiers and other members of the armed forces.  A contrasting case in point was the Israeli public’s view of the release of Gilad Shalit, held captive as a political prisoner in Gaza for 5 1/2 years by Hamas militants.  Israelis overwhelmingly approved of the deal that exchanged one Israeli soldier for 1,027 Palestinian and Israeli Arab prisoners.  With mandatory national service, every Israeli is but one degree of separation from an active Israeli soldier.  The negotiations for Shalit’s release were based on a tacit promise to all Israeli parents that their government would watch over their soldiers.  Their government would not forget them in captivity or in memorial.