You are here: Home / Archives for Street 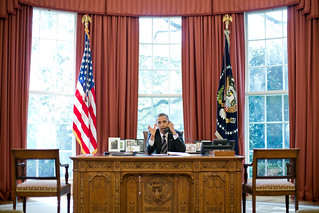 President Obama and Prime Minister Netanyahu spoke today as part of their regular consultations, and to follow up on Secretary Clinton’s meeting with the Prime Minister.  The two leaders discussed a range of security issues, and the President reaffirmed his and our country’s unshakeable commitment to Israel’s security.  The two leaders underscored that they are in full agreement on the shared goal of preventing Iran from obtaining a nuclear weapon.  The Prime Minister welcomed President Obama’s commitment before the United Nations General Assembly to do what we must to achieve that goal.  The two leaders took note of the close cooperation and coordination between the Governments of the United States and Israel regarding the threat posed by Iran – its nuclear program, proliferation, and support for terrorism – and agreed to continue their regular consultations on this issue going forward.