You are here: Home / Archives for Sarah Melamed 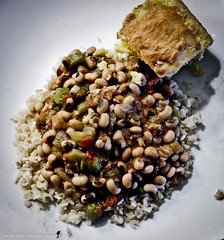 I’m hungry. Tired too. I just want to eat. All I need is a steaming bowl of soup waiting when I get home.  “Come, sit down, enjoy” it seems to say. I don’t want company, conversation or etiquette. Only me, alone… sometimes.

When the travails of the day have lifted, I search for the easy camaraderie of family, friends. At the table we share snatches of conversation between bites “You won’t believe this… And he said… and I feel…” before the clang of dirty dishes hit the sink and the urgent pull of everything else. It is another mundane weekday lunch, the pulse of our home.

In the rush that life can become, I don’t want the kitchen to be another source of stress. Yet it is precisely then I crave home-cooked foods. Instead I simplify — one pot meals, fewer ingredients, stream lined recipes — nothing too meticulous or time-consuming. Homely and homey, a panacea for fast-paced modernity.

Here is my take of creole style black eyed peas, hodgepodged together from what I had in my fridge. Curiously I rarely used this legume until now, preferring lentils as local tradition dictates. Indigenous to West Africa, black eyed peas were introduced to the southern United States in the 17th century where they quickly became the mainstay.

In Israel, black eyed peas, or lubia as they are known in Hebrew, hold important symbolic significance for the  Jewish New Year. Persians are also a big consumer of this humble bean and would probably agree with the Americans that they are the perfect “soul food”.

Place the black eyed peas in a bowl and cover with water. Soak overnight. The following day rinse the beans and place in a pot. (At this point the beans can be drained and stored in an airtight container in the freezer for later use.)  Cover the beans with fresh water so they are submerged with about 1-2 cm of liquid. Bring to a boil, reduce heat and simmer until the beans are soft but still hold their shape. Set aside.

Note: After a few bad experiences with the hard water in Israel I prefer to cook beans separately. If the beans never soften I can salvage the rest of the ingredients.

In a medium sized pot sautee the onions until golden brown. Keep the flame low to caramelize instead of burn.  Add the garlic and mix until the aroma is released, about 30 seconds. Add the diced vegetables (carrots, celery and pepper) and mix until combined. Add the tomato paste, spices and the beans with their cooking liquid. Cook for about 30 minutes, or until the vegetables are soft.  If the stew is watery, uncover and reduce by evaporation. Sprinkle with parsley and serve with steamed white rice.

Sarah Melamed is the creator of Food Bridge.  She lives in Israel, and loves exploring how food is a bridge that connects people to each other as they share it around a table.