You are here: Home / Archives for Kalenjin 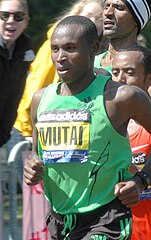 When I recounted seeing a small group of unusually dressed men in shul last Sunday in Staten Island and realizing that they were trying to catch a minyan before participating in the New York Marathon (which begins in that borough), my daughter asked me if any of them had a chance of winning the race.

“Nah,” I said. “It’ll be a Kenyan.” Four of the New York race’s past ten men’s race winners, after all, hailed from that African country. Actually, make that five now. (Congratulations, Geoffery Mutai.) A fellow Kenyan came in second.

My daughter’s face, I thought, evidenced some surprise, as if I had espoused some rank racism. So I explained that Kenyans seem particularly physically endowed for long-distance running. Kenyans, that is, and Ethiopians (another citizenry with disproportionate wins in marathons) who belong to the lithe and limber Kalenjin tribe.

More after the jump.
If believing that different populations have different abilities constitutes racism, I guess I am a racist. But the word’s pejorative meaning is more properly reserved for assigning negative human character traits-like dishonesty, laziness, drunkenness, or untrustworthiness-to particular racial or ethnic groups. People have free will, of course, and every individual should be judged on his own merits.

Recognizing that there are differences in aptitudes among different peoples, however, should be no more objectionable than noting physical differences, like the fact that Hutu tribesmen are stocky and relatively short while their Tutsi neighbors are lanky and taller. Or that one doesn’t come across many Ashkenazi (or for that matter Sephardi) fullbacks.

Even excellence in mental attributes, like the commonly perceived abilities of Asians in mathematics, or of Jews in business or science, should not be seen as insulting others. Even if the perceptions are accurate, they are of limited import.

The Torah refers to the Jewish people as “a wise nation” but that doesn’t mean we’re all intellectually gifted. Even Jews who aren’t the brightest candles in the menorah have a Divine mission on earth no less precious than the Rogachover down the block. And Chazal’s honorifics customarily run not to words like “genius” or “brilliant” but to ones like “righteous” and “G-d-fearing.” That’s what counts.

It’s plausible, of course, that Chinese or Jewish intellectual accomplishments-or Kalenjin dominance of marathon running-are due to something other than genes; cultural and environmental factors certainly play important roles. What’s more, even fact-supported stereotypes are becoming increasingly irrelevant, as gene pools become more jumbled with each generation.

Still, some population-associated abilities remain, and some people seem to have a hard time with that. They waste precious time feeling bad for themselves and resentful of others, losing sight of a grand life-truth: It doesn’t matter what abilities we possess; what matters is what we do with them.

Similarly, some people of modest means resent the more affluent. They may suspect (as do some affluent people themselves) that prosperity is the result of superior intelligence. (This, despite the ample and readily available evidence to the contrary.) As believing Jews, though, we should know that economic fortunes are determined wholly by Divine will; they ultimately remain beyond logic and inscrutable to us mortals.

Which thought leads, inevitably, to the Occupy Wall Street protests.

Some among the crowds in lower Manhattan and their counterparts in other cities may well have worthy complaints and clear goals. But what one hears most loudly and most commonly (as even a few minutes at Zuccotti Park were more than enough to demonstrate to me) is simple resentment of the fact that wealthy people… are wealthy. Why, many protesters seem to be saying, and angrily, them and not us?

What a sad way to waste life. Instead of identifying one’s own blessings and setting oneself to the task-the privilege-of utilizing them as fully as possible for as long as possible, those demonstrators self-immolate in the heat of their anger over not being someone else.

But they are a good spur for the rest of us to remember that what matters in this world is not what we have, physically or monetarily, but what we choose.

Most of us wouldn’t waste a millisecond envying a Kenyan’s speed or stamina. None of us should waste even half that time resenting what someone else has.