You are here: Home / Archives for Israeli Independence Day

Rabbi Batya Glazer, Director of the Jewish Community relations Council of the Jewish Federation of Greater Philadelphia, said of the event, “This is our opportunity to come together as a community, to celebrate Israel’s 71st anniversary.” In spite of the inclement weather, she said, “we’re hoping for the best.” Volunteers handed out samples of Israeli confections, including cookies from the Israeli restaurant Zahav.

Addie Lewis-Klein, Director of Community Engagement   of the Jewish Federation of Greater Philadelphia, said, “We are out here at City Hall celebrating Israel’s 71st birthday.” That morning, she added, Philadelphia’s City Council passed a resolution supporting Israel, “and now we’re out here, under the billowing Israeli flag,” she said, “giving out Israeli treats and taking pictures with Israeli flags to show our support, and giving out some information and other fun things to show our support for Israel.”

Michael Sklaroff, a graduate of Barrack Academy, represented the Friends of the Israel Defense Forces (FIDF). “I’m here to raise awareness,” he said, “for our organization, which helps wounded soldiers recover, and supports people who want to go over to Israel to enlist in the IDF, but don’t have a place to stay and a stipend for meals.” Sklaroff said a number of young people go to Israel to serve in the military, “tons of people in our organization.” FIDF, added Sklaroff, also provides scholarships for Israeli military personnel who want to go on to college.

We have been blessed to merit participation in the celebration of 70 years of the modern State of Israel. The dreams of countless Jews have been realized in our times. After the Holocaust, it was the goal of the survivors who participated in building the new State of Israel to create the “New Jew,” one who would be different than the ones in Europe before the war. This “New Jew” was the Sabra, the Israeli. Sabras were strong, proud Jews. They did not look, act, speak, or dress like their parents. They also did not eat the foods of Eastern Europe. They ate Israeli food such as pita, falafel, hummus, and olives. Lets celebrate this wonderful occasion with an Israeli falafel bar.

Your falafel bar may replicate the experience of going to a falafel stand in Israel. You may purchase most of the components of a falafel ready made. Your guests will be free to compose their falafel any way they like. You will need:

For your convenience, the only thing on this list that I recommend that you prepare from scratch is the Israeli salad. This salad is very versatile and open to interpretation. If you like you may add diced radishes, fresh mint leaves, or parsley. You may also omit anything you don’t like and strip it down to the basic tomato, cucumber and pepper salad. You may purchase the rest already prepared either refrigerated, canned, or frozen.

Israelis traditionally party on Independence Day, Yom Haatzmaut, with a mangel, or Israeli barbecue. They season their meats with traditional Middle Eastern spice mixtures. The huge aliyah of Jews from Argentina has also brought recipes from one of the best cuisines of South America to Israel, including Argentinian parrillada, or barbecue.

When the sun sets on May 1, the celebrations — and the grilling — will begin. END_OF_DOCUMENT_TOKEN_TO_BE_REPLACED

David Ben Gurion declared Israel’s independence on May 14, 1948. In the Hebrew calendar, this is the 5th of Iyar. Yom Ha’atzmaut, the national day commemorating Israel’s declaration of independence, is celebrated on this date every year.

As the sun sets, an official ceremony is held by the Israeli government at Mt. Herzl to celebrate. Twelve torches, symbolizing the twelve tribes of Israel, are lit. When the ceremony concludes, fireworks illuminate the skies.

The next day, the International Bible Contest is held. High school students from around the world compete for a scholarship to Bar Ilan University.

Commanders and fellow soldiers select 120 IDF soldiers who have performed their duty to their country in an outstanding way. They receive an award from the president of Israel at his residence.

The Israel Prize, the highest honor that Israel awards, is handed out. It is given for achievements in the humanities, the sciences, culture, and lifetime achievement.

The celebrations include visits to IDF bases. Weapons are exhibited for the civilian guests.

Many people participate in a festive meal, which is usually a potluck picnic barbecue. This year, Yom Ha’atzmaut falls on May 11th. You may experience this festive tradition by hosting your own Israel themed dinner. A fun activity for your family and guests is to decorate their own Israeli Flag inspired cupcakes. You may buy or bake cupcakes. Then, decorate with frosting, sugar sprinkles and Israeli flag toothpicks. 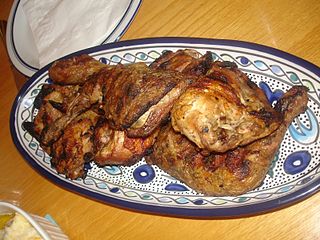