You are here: Home / Archives for Healthcare

In support of truly accessible, high quality healthcare for all, and in defense of the steps forward made by the ACA, we are sponsoring a 24-hour vigil. We are telling personal stories as well as reading Healthcare/ACA-related stories from our friends and family at Senator Toomey’s office. Bring a chair. Bring a story. Bring a friend.

Check the website to RSVP or to find a related event at other times and locations.

This week, the federal government released new comprehensive statewide and national data on how many Americans have enrolled in new, more affordable health coverage through the Affordable Care Act’s Marketplaces.

The data shows that nearly 3.3 million people had chosen health plans through state-run exchanges as well as the federal exchange by February 1 — a 53% increase over the number enrolled a month earlier.

Many of these individuals are already receiving coverage as of January 1. Those who enroll by March 15 will receive their coverage starting April 1.

Open enrollment ends on March 31. Anyone who hasn’t enrolled by then, may have to wait until 2015 for health insurance and may be subject to a penalty.

During a Monday meeting in her Philadelphia office, the regional director of the Department of Health and Human Services, Joanne Grossi, told local organizations working on enrollment that the area had achieved the second-highest percentage in the federal marketplace, after Miami. This ranking was among cities in the 36 states that allowed the federal government to run their insurance exchange. Some larger cities, including New York and Los Angeles, are in states that created their own insurance marketplaces.

More than half of the enrollees (55 percent) are women and nearly 1 in 3 enrollees in January were younger than 35.

Planned Parenthood Southeastern Pennsylvania’s CEO, Dayle Steinberg, said, “These numbers are not surprising, given the law’s protections and benefits for women.

“That’s why Planned Parenthood Southeastern Pennsylvania is working to ensure that our patients and the communities we serve understand what they are eligible to receive.”

Representative Ted Cruz has demonstrated his ability to cow Speaker John Boehner and shape the Republican agenda in the House of Representative. As intended, his grandstanding will shutdown the parts of the United States Government tonight at midnight, and raise Cruz’s prospects as poster boy for the Tea Party in the 2016 Republican primaries.

However, these theatrics and scary advertisements with a clown dressed up as Uncle Sam performing colonoscopies and gynecological exams will have no effect on the rollout of the Affordable Care Act (or “Obamacare” to some). The rollout of the insurance exchanges is mandated by law and will be unimpeded by the government shutdown.

Starting at midnight Americans around the country will have access to their state’s insurance exchanges, giving many Americans access to affordable healthcare for the first time, and giving the rest of us an important alternative.

Information on how Obamacare is working for millions of women after the jump.

Finally, I will recommit America to the goal of a democratic, prosperous Palestinian state living side by side in peace and security with the Jewish state of Israel. On this vital issue, the President has failed, and what should be a negotiation process has devolved into a series of heated disputes at the United Nations. In this old conflict, as in every challenge we face in the Middle East, only a new President will bring the chance to begin anew.

“I look at the Palestinians not wanting to see peace anyway, for political purposes, committed to the destruction and elimination of Israel, and these thorny issues, and I say there’s just no way … the Palestinians have no interest whatsoever in establishing peace and that the pathway to peace is almost unthinkable to accomplish … [S]o what you do is, you say, you move things along the best way you can. You hope for some degree of stability, but you recognize that this is going to remain an unsolved problem…and we kick the ball down the field and hope that ultimately, somehow, something will happen and resolve it.”

Just weeks before the election, Romney isn’t being honest with the American people about his severely conservative positions, and a new video from OFA allows voters to see this dishonesty laid bare. Romney will say anything to win, even if it’s not true. Over the past few years, the real Mitt Romney has consistently committed to overturning Roe vs. Wade and denying women the right to choose. He’s been promising a tax cut including “the top 1 percent,” that is mathematically impossible to pay for without higher middle-class taxes, higher deficits or both. And he has committed to a plan that would put at risk health coverage for millions of Americans living with preexisting conditions. He can try to hide these far-right positions, but voters simply won’t be fooled when he cynically and dishonestly tells voters the exact opposite of what he’s run on. 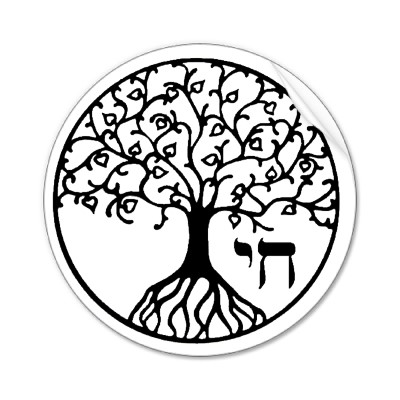 Bend the Arc’s Alan van Capelle explained in JTA that the Supreme Court’s ruling on the Affordable Care Act reflects the Jewish values that inspired so many people in our community to support the bill.

Jewish law and tradition have much to say about taking an active role in guarding one’s health-and the health of our fellow man. Health and life are bedrock Jewish values, to the extent that saving someone (pikuach nefesh) supersedes even the sanctity of the Sabbath. The Shulchan Aruch (Code of Jewish Law) notes, ‘If one has medicine that a sick person needs, it is forbidden to charge more than the appropriate price.’ This statement of Jewish law now becomes the spirit of America’s national health policy, and I could not be more proud.

The Jewish community has long supported a national health-care policy that includes everyone, and traditionally has viewed health care as a communal responsibility. This central Jewish tenet is consistent with a society’s prioritizing of health and safety of everyone in its midst and is demonstrated by the commitment that American Jews have made to supporting hospitals and health services through our communal institutions.

The Jewish Social Action Policy Network held its 2012 Annual Meeting at the Pyramid Club in Center City Philadelphia on June 6, 2012. Guest speaker, bioethicist Ezekiel J. Emanuel, M.D., Ph.D., captivated his audience with the many reasons he is “optimistic about the future of the American healthcare system” and why he believes that it will be “vastly improved” by the end of the decade.

More after the jump.
Dr. Emanuel expressed confidence that the U.S. Supreme Court will find the Affordable Care Act constitutional when the Justices hand down their decision on the healthcare reform law later this month. In his view, there is “No doubt it is constitutional.” “Legally, this is an open and shut case,” he said.

The Court can and, he believes, will uphold the Act on grounds relating to the Necessary and Proper Clause, the Commerce Clause and the federal government’s taxing powers. Extolling the landmark passage of the Act by Congress (which he helped to craft), Emanuel traced what he described as “100 years of effort” by former U.S. Presidents and others to reform the country’s healthcare system.

The new chair of the Department of Medical Ethics at the University of Pennsylvania and Vice-Provost for Global Initiatives, Emanuel is also an Op-Ed contributor to The New York Times and founding chair of the Department of Bioethics at the National Institute of Health. During the Obama administration’s development of the Affordable Care Act, he served as a Special Advisor on Health Policy to the Director of the Office of Management and Budget and on the National Economic Council.

Dr. Emanuel began his remarks by focusing on the magnitude of the cost of the country’s healthcare system, which he said is the largest in the world. According to Emanuel, in 2010, the country spent $2.6 trillion dollars on healthcare, up to 50 per cent more per person than the two other highest-spending countries, Norway and Switzerland. The level of U.S. healthcare spending makes it the fifth largest economy in the world. It is growing by $100 million every year.

Despite this level of spending, Emanuel dubbed the quality of healthcare in this country as “average, no matter how you measure it.” “On no metric is this a healthcare system we should be proud of,” he said. It is a system that “doesn’t cover 50 million Americans” and where there is a 20 per cent chance of re-admission to a hospital within 30 days after discharge. This, he said, is both “indefensible” and “unacceptable.”

Viewing the present time as a “transition period when there is a lot of uncertainty and change,” Dr. Emanuel believes the system will be vastly improved by 2020. He envisions a healthcare system of the future that will be more cost conscious, more focused on higher quality of care and designed to provide less unnecessary care. He predicted that the healthcare system in this country will do a better job of coordinating care and rely on improved metrics about quality of care and assessment of doctors. “Comparative effectiveness research,” he said, “will provide us with better understanding of what treatments work. We have examples of systems that work” and know “solutions exist already.” The challenges going forward as Dr. Emanuel sees it will be to “invent ways to replicate solutions.”

At the conclusion of his presentation, Dr. Emanuel took questions from the audience, including long-time JSPAN members and guests. JSPAN Board President Brian Gralnick and incoming President Lynn Zeitlin, Esquire, concluded the formal portion of the program with a brief discussion of JSPAN, what its mission is as an organization, the impact it has already had, and how it plans to expand its reach in the future. President Zeitlin also recognized outgoing Board Treasurer Stephen Applebaum and JSPAN Policy Center Chair Susan Myers for their valuable contributions and diligent work for the organization. 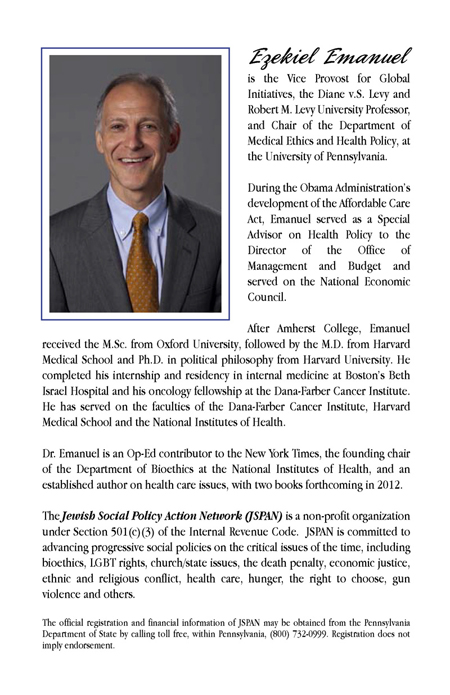 Don’t miss your opportunity to hear a White House insider’s view of the future of American healthcare.  A top healthcare insider is coming to The Pyramid Club on June 6 to address JSPAN and you can be there.

Who: Dr. Ezekiel Emanuel, ex-White House advisor on healthcare (also brother of the Mayor of Chicago), will speak on the future of healthcare reform and American medicine.

Emanuel, Chair of the Department of Medical Ethics and Health Policy at the University of Pennsylvania, is well known on the Op-Ed page of the New York Times and in the media.  He headed healthcare at the White House Office of Management and Budget in 2009-10, during the design and Congressional passage of the Affordable Care Act.

Where: The Pyramid Club, 1735 Market Street, Philadelphia.  With a great dessert buffet, the cost is $10 (free to JSPAN  members with 2012 dues paid). Discount parking is available.

Jonathan Chait lays out how Romney has reversed course and is now criticizing the health care insurance mandate which he previously advocated that Obama adopt on a national level based on his model in Massachusetts.

See for example the three videos after the jump.