You are here: Home / Archives for Grill 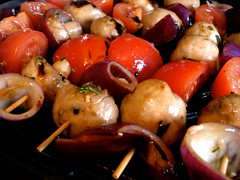 What should you serve the non-meat eaters in your circle for the Fourth of July barbecue? This year, surprise them with a delicious, satisfying meal of marinated vegetables and grilled cheese skewers.

Sheep’s milk cheese is good for grilling.  It can withstand very high heat without melting.  When you grill it, it develops a delicious golden crust and a firm salty texture.  You can mix your choice of vegetables such as cherry tomatoes, squash, eggplant, pepper, onion, and mushrooms in a marinade to infuse them with flavor.  Below is a recipe for a homemade marinade from Israel that will keep the inside of your vegetables moist when you grill them.

More after the jump.
Marinade Recipe For Vegetable-Cheese Skewers

Serve with rice pilaf and a crisp, green salad.  This repast is vegetarian and gluten-free.

State Rep. Babette Josephs, D-Phila., said she is discouraged that House State Government Committee members are being asked to vote next week on Congressional redistricting legislation (H.B. 5) because it fails to list any specific geographic information of how the Congressional districts will be composed and the public has not been given the chance to comment on it.

Josephs is the Democratic chairwoman of the House State Government Committee. Committee members were informed yesterday they would be voting on the bill Monday. She immediately wrote to her Republican counterpart on the committee, state Rep. Darryl Metcalfe, R-Butler, asking for a more transparent process, as well as the complete details.

Earlier this year you and Senator McIlhinney held three hearings across the state in which you congratulated yourself for how open, transparent and inclusive Congressional reapportionment would be accomplished in this legislative session. If you were serious about openness, transparency and inclusiveness, wouldn’t it be wise to share the details of the plan including maps well in advance of a voting meeting and to gather public comment from interested parties and community leaders in no less than three public hearings?

Earlier today Metcalfe canceled Monday’s meeting but rescheduled it for Wednesday, Dec. 7. Josephs said she assumes an amendment that provides the details she seeks still will be brought out at the last minute, like most of the legislation brought forward by the House Republican majority this session.

The kicks and punches to democracy just keep on coming from Chairman Metcalfe and Republican Leader Mike Turzai. First, the Legislative Reapportionment Commission approves a preposterous preliminary reapportionment plan for state House and Senate districts that has been criticized across the state. Now, they’ll push through a Congressional map that the public will have little to no time to examine or provide input on how it will affect their communities. This is not democracy. It is dictatorship.

Josephs introduced legislation that would require openness and fairness in the redistricting process. Her bill  (H.B. 134) was referred to the House State Government Committee more than nine months ago but Metcalfe has not allowed it to be brought up for discussion, let alone a vote.

My bill gives the public more of a vested interest in how legislative districts are drawn. The actions of the Legislative Reapportionment Commission these past several weeks, the inaction of Mr. Metcalfe on my legislation and this Congressional map shrouded in secrecy make clear the Republican majority is not interested in a transparent and open process. They should be ashamed.

Josephs noted Metcalfe has yet to advance a single Democratic bill, while she, when she was majority chairwoman, advanced 28 Republican bills.