You are here: Home / Archives for ensign

As a result of the United States’ continuing pressure against Iran due to their pursuits of developing nuclear weapons, a recent report from Reuters reveals that the “gas-for-gold” trade between Turkey and Iran has been frozen out. This follows on previous reports of the crippling effects of US and European Union sanctions against Iran and a commitment from President Obama to “prevent them from getting a nuclear weapon” during the State of the Union.

The most recent sanctions, passed into law last summer and implemented on February 6th by the Treasury Department, require Iran to use the money from any oil sales to Turkey for sanction-free goods such as food and medicine.

The full text of the Reuters report can be found here. 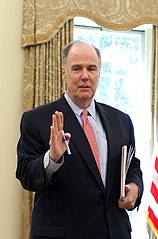 In a column in Sunday’s New York Times, White House National Security Advisor Thomas Donilon condemned the terrorist acts committed by Hezbollah and called for the European Union to add Hezbollah to its list of terrorist organizations. Donilon’s column follows a recent report from the Bulgarian government denouncing Hezbollah’s role in the July Burgas bus bombing that killed five Israeli tourists and injured 32 others. Donilon wrote:

Since 2011, the group has murdered civilians in Bulgaria, seen its activities disrupted in Cyprus and Thailand, and worked to plot attacks elsewhere. It is helping to prop up the brutal regime of Bashar al-Assad in Syria; and it acts as a proxy for Iran’s Islamic Revolutionary Guards Corps in the region and beyond. In doing so, Hezbollah is putting the well-being of Lebanon and its people at risk.

Bani Brith International’s response on the subject after the jump.

Now that Bulgarian authorities have exposed Hezbollah’s global terrorist agenda, European governments must respond swiftly. They must disrupt its operational networks, stop flows of financial assistance to the group, crack down on Hezbollah-linked criminal enterprises and condemn the organization’s leaders for their continued pursuit of terrorism.

The United States applauds those countries that have long recognized Hezbollah’s nefarious nature and that have already condemned the group for the attack in Burgas. Europe must now act collectively and respond resolutely to this attack within its borders by adding Hezbollah to the European Union’s terrorist list. That is the next step toward ensuring that Burgas is the last successful Hezbollah operation on European soil.

B’nai B’rith International has issued the following statement on this subject:

Mladenov briefed the council on the findings of the report that holds Hezbollah responsible for the July 2012 attack in Burgas that left five Israeli tourists and one Bulgarian dead, while wounding 30 others.

When asked by reporters if he believes Hezbollah should be named a terrorist organization by the EU, Mladenov replied: “Given the fact that we’ve already made quite firm statements about where we believe the responsibility for that attack lies, I think the answer is quite obvious.”

According to various news reports, there is no official timetable for the EU by which to reach a decision on Hezbollah’s designation. The council and other EU officials will examine the Burgas report and then bring it to a debate. A unanimous vote is needed to classify Hezbollah as a terrorist organization.

B’nai B’rith will continue to urge EU officials and other interested parties to name Hezbollah for what it truly is — a violent and dangerous organization whose acts of terror have been carried out on three continents.