You are here: Home / Archives for Eat My Tailgate

Everyone has an opinion about the best type of pizza: Famous Ray’s pizza of New York City, sicilian, thin crust, crust with cheese… The list can go on and on. But before you start drooling as you picture a sizzling hot slice of pizza, with the gooey cheese dripping off the sides and a crispy crust that breaks apart in your hands, let me stop you there. I like alternative versions of pizza, i.e. pizza without the typical crust. Last Wednesday was no exception: I was going to make crusted cauliflower pizza.

I could hardly contain my excitement when I arrived home after a long, hot and sticky day in the city of Philadelphia. I started the process by splitting a head of cauliflower in half and cutting out the stems, only keeping the florets (flower shaped pieces) from the top and placing them in a large bowl.

After microwaving the florets for about eight minutes, I took them out to cool and began whisking an egg in a separate small bowl. As the cauliflower was cooling, I added the egg into the bowl, a quarter teaspoon of crushed garlic and half a cup of shredded Mozzarella cheese.

Once the ingredients were stirred together, I poured the crust mixture into a pan and let it bake in the oven for 15 minutes. Then it was time for the toppings: a layer of tomato paste mixed with basil, three handfuls of sprinkled cheese, thin slices of a juicy red tomato, some chopped scallions and pieces of spinach.

The pie went back in the oven for six minutes, allowing the cheese to melt and the toppings to cook. It was hard to wait the short amount of six minutes as the aroma of the bubbling cheese and pungent garlic wafted through the house.

When the timer went off, I raced into the kitchen and pulled the pizza out of the oven, and could hardly contain my eyes and tastebuds. The cheese had melted into a white stringy bed as it peaked out through the luscious red color of the tomato, the bright kelly green scallions, and the dark forest green spinach.

Instead of a hard and heavy taste of breaded crust, the cauliflower was light and fluffy. The garlic flavor seeped through the vegetable toppings, the tomatos were soft, and the scallions added a bit of a crunch. I had one slice, then another, and then picked the toppings off the cheese. I could not stop myself — it was really good. I think it is safe to say that it was the best type of pizza I have ever eaten. You can eat the pizza with anything, but mine went well with a glass of Rosé. 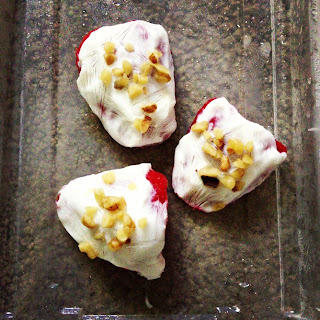 On a recent trip to the supermarket, I bought some beautiful ripe, red strawberries. I wanted to make something cold, sweet, creamy, fresh and fruity for Shavuot. I came up with a great combination for a light dessert, or snack.

I washed, hulled and halved some juicy strawberries. Then I opened a container of plain greek-style yogurt, and drizzled in some honey for sweetness.

Recipe continues after the jump.

Cartoon Courtsey of Yaakov “Dry Bones” Kirschen.
Next, I took a knife and spread the yogurt on top of the strawberries like icing until it covered their entire top. Then, for a crunch, I sprinkled miniature chopped walnuts on top of the layer of yogurt. I placed the sliced yogurt-covered strawberries into a container with a lid, and put them in the freezer for about four hours.

Later in the day, after returning home from a long walk, I was hot and wanted something to cool me off. I pulled out the container to find the strawberries frozen solid. I plopped a frozen strawberry half into my mouth. The yogurt melted into a creamy liquid, and along with the crunch of the nuts the taste was soothing. This snack was a dairy dream, filled with delicious flavors.

One night I decided I needed to spice up my life a little bit, in the sense of food, and what I was going to eat for my meals: dinner and dessert. For dinner I decided on brown rice, stir-fried roasted butternut squash and onions — tasty and easy. However, I always have more trouble deciding what to have for dessert, because I am not a huge fan of sweets.

I opened our snack cabinet to find a box of mini graham cracker squares, mini jet-puffed marshmallows and mini semi-sweet chocolate chips. Voila! I was going to make mini s’mores for dessert! But first, I had a prior commitment — a yoga class with my dad. After an hour of relaxation, the only thing on my mind was the s’mores. As we pulled into the driveway, I jumped out of the car, rushed into the house and took out a packet of chopsticks. Why chopsticks, you may ask? Well, it was a replacement skewer because these s’mores were taking place over an electric stove, rather than a smoky BBQ grill.

I stuffed two mini marshmallows on the chopstick and let the white puffs toast over the low heat from the stove, as they caught on fire and turned golden brownish-black. After about three minutes, the marshmallows were ready to be combined with the other ingredients. I placed one mini brown speckled cracker on the plate, slid my marshmallows off the “skewer” as they laid on top of the cracker, and then sprinkled 3-4 mini chocolate chips on top. To finish it off, I placed one more mini cracker on top, making it the perfect s’more sandwich.

The first bite was crunchy but gooey. The crunch from the crispness of the cracker mixed with the gooeyness of the marshmallows, as the chocolate chips melted in my mouth. I went back to roast some more marshmallows. Once I start, I can’t be stopped — I’m a sucker for roasted marshmallows. For not being a big dessert fan, it was the perfect amount of sweetness with a quick crunch, leaving me happy and satisfied.

As I opened the cereal cupboard in the kitchen of my Sorority house, my eyes scanned the top shelf, as I looked for my Rice Chex cereal. I wanted to make something different, a fun food invention. After seeing a couple of my Sorority sisters create these crazy colored, deliciously filled bags of homemade trail mix, I decided it was my turn.

I pulled out the box of cereal, measured a cup of Chex and dumped it into a small zip-loc baggy. Then I added in a handful of dark red sticky Craisins and shook the bag, shuffling the food up and down. Even with just two ingredients, this snack looked salty and sweet and ready to eat, but I could not stop there. I waterfall-dropped some Almonds in the bag and again shook it up and down. I returned to my room to finish off my creation, I rummaged in my food drawer until I found my last bag of freeze-dried fruit. I tore the bag open and dumped in the freeze-dried strawberries and bananas.

The mix looked complete. The colorful array of the burgundy Craisins, the bright redish-pink strawberries and the soft earth tones of the Chex cereal, the bananas and almonds. My first bite was full of crunch of the Chex, mixed with a soft, squishy after bite from the Craisins. The strawberries and bananas melted in my mouth, as I went back for a second bite. There’s something to be said about playing with your food when you’re over the age of a toddler… but I’m not embarrassed to say, I play with my food and I have fun.

Tonight for dinner at my sorority house we were having my all time favorite meal… salmon.  Okay, just kidding, I don’t like salmon, or any type of fish for that matter. I debated throughout the day of an alternative meal I could make for dinner and finally decided on a hearty soup. And lets be honest, soup is my favorite food.

Recipe and picture after the jump.

I pulled out the Vietnamese Pho Noodle soup box from my drawer and the cold package of No Oodles noodles from my fridge. The original noodles in the soup taste a bit like straw, so I decided to switch them out for the No Oodles pack of noodles. No Oodles are a new brand of noodles which are zero calorie and gluten free, made from sweet potatoes. They don’t taste like anything plain, but they work for mix-ins with already prepared meals. I carefully placed the handful of No Oodles onto the bottom of the white plastic Pho soup bowl and cut open the Pho soup spice packets and sprinkled them on top of the new noodles.

Then I moved into my sorority kitchen and searched for my mystery ingredients. I started with a small bowl from the kitchen filled with firm tofu and raw broccoli as well as a plate with vegetables from the salad bar — shredded carrots, chopped green peppers, sliced mushrooms and dark green beans. Tonight my sorority’s kitchen salad bar was going to take on a new meaning. The ingredients could hardly be contained in the small bowl, as I filled it to the line with water, I had to push the food back into the bowl so it wouldn’t fall out.

I placed my “homemade” soup into the microwave for two minutes and 30 seconds and out came a steaming hot bowl of flavors. I spooned the broth into my mouth and was instantly taken aback by how spicy it was, but it mixed well with the other plain vegetables. The broccoli was soft, the mushrooms were cooked and the peppers burst with crunchiness in my mouth. The spoonfuls and forkfuls were filled with noodles, vegetables, broth, the flavors were endless. The noodles, so long and clear, were a perfect addition in the bowl of goodness.