You are here: Home / Archives for AFP 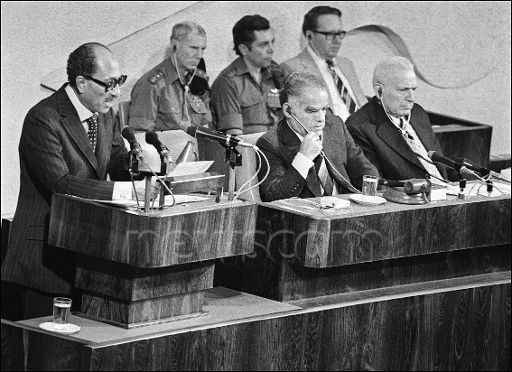 While some are raising concerns about the future of the Israeli-Egyptian peace treaty now that the Muslim Brotherhood candidate has won Egypt’s presidential race, AFP has a different issue with the historic bilateral agreement. Today AFP refers to “1980, the year after Cairo signed its peace agreement with Tel Aviv.” (Emphasis added.)

AFP would hardly be the first to relocate Israel’s capital from Jerusalem to Tel Aviv, but the misinformation is all the more jarring in light of then-President Anwar Sadat’s unprecedented trip to Jerusalem in 1978, paving the way to the Egyptian-Israeli peace agreement.

Perhaps AFP would do well to review its own archives from that time, including this AFP photograph of Sadat addressing the Knesset, the Israeli parliament, in the capital city, Jerusalem:

Eleven days before Mr. Sadat made his trip to Jerusalem, he said in Cairo that he was willing to go to ”the ends of the earth,” and even to the Israeli Parliament, in the cause of peace. The Israeli Government made known that he was welcome in Jerusalem, and after complex negotiations he flew there, although a state of war still existed between the two nations.

His eyes were moist and his lips taut with suppressed emotion as he arrived, but his Arabic was firm and resonant when, hours later, he told the hushed Israeli Parliament, ”If you want to live with us in this part of the world, in sincerity I tell you that we welcome you among us with all security and safety.

In 1978, the leader of the Egyptian nation, which at the time was in a state of war with Israel, could bring himself to recognize Jerusalem as the capital of Israel, but in 2012, AFP cannot?