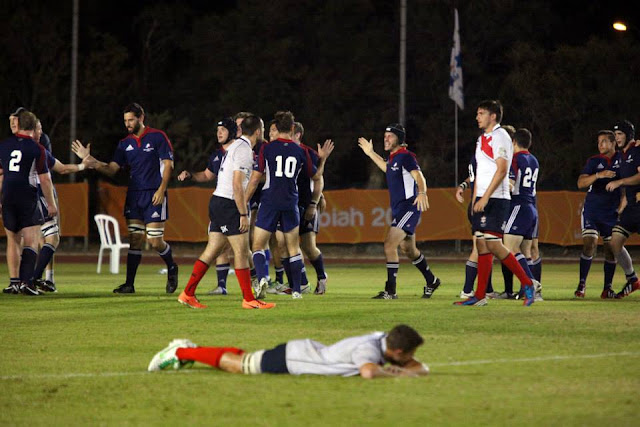 After winning the rugby sevens tournament last week, the U.S. rugby team for the Maccabiah also won the bronze medal in the rugby 15s tournament after beating Great Britain 15-3 in the game for third place.

With this win, the U.S. once again retained its status as the only team to win a medal in each rugby tournament in the history of the games. Head Coach Shawn Lipmam, who previously won medals as a player in five Maccabiah tournaments, broke the record for medals in Maccabiah open category tournaments, as he has seven now.

More after the jump.
Joel Cohen and Jared Braun scored the game’s two tries (5 points each), and Taylor Howden added one conversion kick (2 points) and one penalty kick (3 points). In the semi-final game, the U.S. lost to Australia 10-18. Israel won the tournament after beating Australia in the final game. The two teams that reached the final are the ones that play as a team year-round. Lipman said:

We built a remarkable team that arrived in Israel as the fittest and strongest we have ever assembled. Even though we had trained individually nothing can compare with playing together as a team and getting consistency in execution under pressure. We think we were good enough to have beaten Australia to make the final, but retain lapses on execution hurt us. The game we played against Great Britain for bronze was amazing and an excellent way for us to end. Israel deserved to win the fifteens tournament, and I think it is a good thing for the tournament that more countries are doing well as the competition is becoming more broad based. 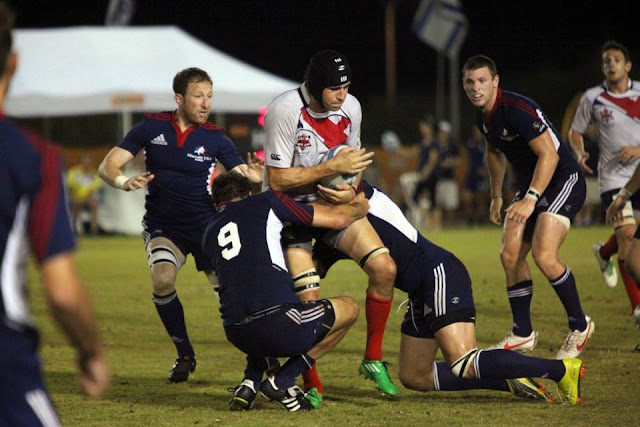 Regarding the sevens tournament, Lipman said:

It was a great accomplishment to have won the gold in sevens, as Israel keeps playing international sevens all the time, and we had only two sevens training sessions. We also had to come back from having lost to Israel and tying South Africa prior to the sevens tournament final game. We showed tremendous heart and courage.

Throughout the games, the team suffered with the absence of the injured Zach Test. The 23-year-old is already the U.S. sevens team’s leading try scorer among active players, with 73.

“I am sure Zack Test would have made a big difference for us, but this is a team sport and one can’t rely on a person,” said Lipman. “Rugby is a squad effort, and nothing would have been accomplished without everyone that came, including our amazing support staff.”

More important than winning medals is the fact that this tour changed our players’ lives in very deep and meaningful ways. Every participant in our team is leaving as part of a band of brothers, and now has a family that will always be there with him for the rest of his life. That is the real gold!