The Perelman Jewish Day School Annual Tribute Event, held last week at the Academy of Natural Sciences, was a huge success: More than $1.5 million were raised for Perelman’s Annual Fund.

The evening included a special video presentation: The video on the right featured six of our students sharing the impact their Perelman education has had on them and their plans for the future. 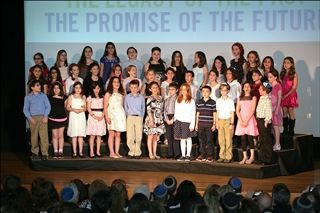 Close to 350 members of the Jewish community in Philadelphia, parents, grandparents, faculty members and Friends of Perelman, were in attendance.

The event also honored the Saligman family and paid tribute to Jay Leberman as the outgoing head of school. Next year, the Robert Saligman Middle School will become part of the Jack M. Barrack Hebrew Academy. Leberman will be making a new home for himself as well, as he, along with his wife Aviva, fulfill their dream of living in Israel.