You are here: Home / Uncategorized / Pope Resigns for Health Reasons 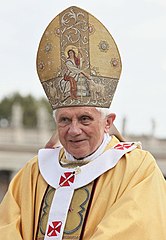